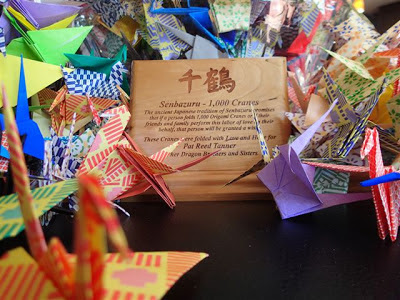 1000 origami cranes were delivered to my sister by a high school classmate who had enlisted other graduates to contribute to the project and show their support for her battle against cancer. Accompanying the huge pile of colorful cranes with wings spread wide was a plaque with these words burned into the wood:

Senbazuru - 1000 Cranes
The ancient Japanese tradition of Senbazuru promises
that if a person folds 1000 Origami Cranes or if their
friends and family perform this labor of love on their
behalf, that person will be granted a wish.

The project was deeply meaningful because of our Japanese heritage and wonderful memories of growing up on Okinawa.

What struck me about this symbolic gift was how a community can impact one individual in simple but profound ways. When a community joins hands, something powerful, even miraculous, emerges.

Encouragement. Hope. Solidarity. Healing. Courage. Strength. And most of all, LOVE.

There are many ways a community can express support. Often they are rooted in cultural traditions like a quilt created by a group of women for a wedding shower or a "barn raising" to help a family whose home was lost. For the Japanese culture, 1000 origami cranes.

Makeshift public memorials have become more popular as a way for a community to share in the grief and loss of a member.

Whatever expression is chosen by a community, it can help to infuse hope into the one who needs to know she is not alone in what she faces. But it's also redemptive for the community.

Besides a way to deal with their own grief, a community needs to see visible signs of their own compassion. It gives hope that all is not lost, that there is still good in the face of evil, that we are still capable of loving well.

One paper crane is fragile but when you see 1000 paper cranes, a miracle happens and one's own fragility is transformed into strength.

Tears for the Children

Matthew 2:18 (NIV)
“A voice is heard in Ramah, weeping and great mourning, Rachel weeping for her children and refusing to be comforted, because they are no more.”

Innocent children. Evil intent. A gun instead of a sceptor.

Grief shared across 2000 years, one in the Afterbirth, the other in the Advent.

We weep.
Posted by Harriet Reed Congdon at 3:39 PM No comments:

The Real Elders Among Us


I sat with my new friend, a sweet soft-spoken woman with graying hair. We were sharing prayer requests and it didn't take long for her share her experience in the church where she and her husband had attended for years. With some hesitation and tears on the verge of spilling, she said this: "In all these years, no one has asked me where I can use my gifts."

Immediately I had a deep feeling of empathy as I remembered one of my own church experiences. For over a year I had been advocating for women but never once during that time did the elders ask me what God was calling me to or where I wanted use my gifts. I got the message.

Don't question where we put you - we are the gatekeepers of the Spirit's work among God's people.

But that's not how I read my Bible. Rather than listening to the Spirit and growing the church toward maturity, leaders can act like a dam on a river that restricts its flow. Asking and listening well to the Spirit AND the people will help to open the floodgates.

On behalf of my friend and others like me who are in this middle place
between birth and death,
between our stories of youth and our last chapter of life,
between the journey of growing into our unique take on life and faith
and the final journey to heaven:
God is not done with us yet.

His Spirit is moving, transforming and empowering the elders among us. (Here I am referring not to church leadership but to those in the pews who are 50+.)

In fact, as I wrote in an earlier post, not affirming this hurts the church and grieves the Spirit of God "who more often than not waited until His appointed leaders were well past youth before they were called to enter into their most significant leadership and ministry roles." Remember Abraham, Sarah, Moses, Zechariah and Elizabeth, and Anna.

This is what I used to hear from the older church population when I was younger and seeking to empower others in ministry: I've done my duty in the church. It's the younger generation that needs to step up.

Looking back I wonder if the problem was not lazy elders but discouraged ones. Elders tired of being used and not known. Elders drained from working in expected roles rather than serving in their gifted roles. Elders used to duty and discipline but not freedom and joy.

Today, with the emphasis on the younger generation and the real need to disciple them well toward maturity, there is a danger of ignoring the elders into the margins, of misinterpreting the movement of the Spirit in their lives, of forgetting that dreams and visions do not die at age 50.

There is a danger that as the population of baby boomers swell within the ranks of the retired, these neglected servants and mentors shrink within the church.

We can't afford the same mistake.
Posted by Harriet Reed Congdon at 8:25 AM 6 comments:

It's a Small World Afterall

My toes wiggled through the damp sand as I stood at the edge of the Pacific Ocean. It was finer than the sand I had always known. At least the water was warm like what I was used to. But the landscape behind me was foreign.

It was my freshman year of college. Across the vast ocean was home where my family remained while I settled into dorm life. The adventure of leaving home and being on my own didn’t take long to evaporate into the warm salty air of San Diego.

The university was situated on cliffs overlooking the ocean. I would stand and gaze out towards the horizon overwhelmed by the vastness of the separation that was at times unbearable. I wanted to go home so badly. But each time I turned around and walked back to my new world. Eventually it became home.

But the one thing that helped press back the looming lostness was my new faith in Christ. My journey of navigating this country is in some ways a metaphor of my journey into the vastness of God and his love for one small person.

Each step, each move, each tear, each embrace of whatever and whomever God put in my path has enlarged my world both inner and outer. God has grown and stretched me into the space he ordained from the beginning but waited and worked patiently to fill in my 56 years.

The last 12 years have been especially trying and stretching. They were years of regaining a passion for ministry in the church, of earning a masters in theology, and of discovering and using my gifts. But they were also years of wounding, of disappointments, of being misunderstood, of resisting efforts by others to keep me small, and of being named and shamed.

It meant I had to leave two churches that I loved dearly. But I found another church and it felt like I had finally landed on a friendly shore. I was ready to engage my new community and find my niche.

Then just as I thought I was going to fill out the rest of the space God had for me, he had something else for me to do. I found out my sister had lymphoma and she needed me to be a caregiver. God had another battle for me to fight, the beginning of which I described in my last post.

Since then the events have carried me like a whirlwind to another place. Only recently have I had the time to begin processing where I have landed.

My world has become small once again. It consists of only two places, my home in Portland and my second home in Florida. There’s no other place I’d rather be as I have walked on holy ground journeying alongside my sister and her battle against cancer.

But I am on an “island” once again. I have to say no to the yearnings I feel when I stand at the edge of this new ocean and remember the land I once inhabited. I have had to put all future plans on hold. I constantly remind myself that being inwardly large is not directly proportionate to outward achievements. I struggle to believe that my value, my identity, and my gifts are intact and that God will continue to grow me whether I’m constrained on an island or roaming a continent.

For now my world is smaller but I am choosing to believe that I am not.