The Gospel In An Alabaster Jar 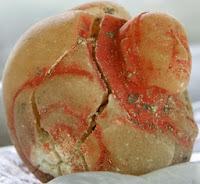 I tell you the truth, wherever this gospel is preached throughout the world, what she has done will also be told, in memory of her.

My guess is, if I were to ask you who Jesus is referring to and what she did, you would have to scramble into the deep recesses of your Bible memory to come up with the story. Or most likely, the connection between his statement and her story has never stuck though you may know the story well. It is recorded in Matthew 26:6-13, Mark 14:3-9 and John 12:1-8. (Luke 7:36-50 is a story of a different woman.)

While Jesus was in Bethany in the home of Simon the Leper, a woman came to him with an alabaster jar of very expensive perfume, which she poured on his head as he was reclining at the table.

With that one act, a firestorm of angry words were loosed as the disciples argued the value of the perfume and where it should have gone. But Jesus defended her. He validated her expression of devotion and reframed it as part of his journey toward the cross.

Wherever this gospel is preached, her story is to be told. How many times have preachers been obedient to these words of Jesus? How could such an amazing tribute be so forgotten?

Ever since my Greek class in seminary where I wrote a 20 page paper dissecting this story, I have been on a mission to wipe away the centuries of dirt and dust on her epitaph. What she did should inspire and encourage every woman who knows the transforming power of the gospel.

Usually the gospel is associated with the twelve male disciples who walked with Jesus, heard his teaching, witnessed numerous miracles, gathered to eat the last supper with him, and then changed the world after the resurrection.

In his gospel account Matthew often is less than favorable in the depictions of his fellow disciples. But when it comes to the story in chapter 26, he shines a brilliant spotlight on a woman who, sandwiched between stories of betrayal, represents the ideal disciple.

Though John identifies her as Mary, the sister of Martha and Lazarus, Matthew keeps her unnamed for the purpose of setting her as the example of discipleship for everyone, both male and female. Interestingly, Matthew never refers to any other of the stories of this significant family trio nor names them.

Yet we know Mary well from the other gospels as the woman who has already broken a serious cultural glass ceiling by sitting at the feet of the Rabbi Jesus. The male voices of complaint are strangely silent. The voice you hear is Martha's and her complaint leads to a gentle rebuke from Jesus concerning priorities. This story is often used to encourage women who identify with her to be more like Mary, to take the time to stop and sit at the feet of Jesus in private devotion.

So many layers of meaning...but back to Mary and her alabaster jar.

In Matthew's one snapshot of her, Mary does not disappoint us in showing us again she moves outside men's boundaries and lives in the freedom of Christ.

For Matthew, she is the personification of devotion, loyalty and extravagant love. Her simple act is transformed into a sacred act by Jesus. What the disciples misunderstand and judge is received by Jesus and elevated alongside the gospel. When they think they have a handle on Jesus' teaching especially concerning the poor (they had just heard the parable of the sheep and goats - Matt. 25), a woman  steps into their man cave and with one act, upsets their rules and rearranges their priorities. She does not utter a single word, yet she teaches the men. She seeks no glory, yet now her story is to be remembered by preachers until the end of time.

The Spirit of the Sovereign Lord is on me, because the Lord has anointed me to proclaim good news to the poor. He has sent me to bind up the brokenhearted, to proclaim freedom for the captives and release from darkness for the prisoners, to proclaim the year of the Lord’s favor and the day of vengeance of our God, to comfort all who mourn, and provide for those who grieve in Zion— to bestow on them a crown of beauty instead of ashes, the oil of joy instead of mourning, and a garment of praise instead of a spirit of despair. They will be called oaks of righteousness, a planting of the Lord for the display of his splendor.
Isaiah 61:1-3

Women are also oaks in the forest in a mutual display of his splendor.

Long defined by the curse and confined by earthly traditions, our stories have been redeemed by Jesus and elevated alongside the stories of men.

Often misunderstood and judged, our acts of discipleship and gifts of service are sacred, being ordained by our one, true Master.

Between the stories of failure or betrayal or abuse by men are women who quietly enter the room with courage, head straight to the feet of Jesus and declare without words their place as an equal disciple.

Matthew, Mark and John were three men who obeyed Jesus by including Mary's story in the gospel accounts. But his command went beyond the historical borders of the written word to the wherever preaching of the spoken word. With his statement, the picture of a most favored and faithful disciple took feminine form.

Any church who takes seriously the words of Jesus should tell Mary's story each time the gospel is preached. Even more, in considering the broader implications of his tribute, every church should validate the presence and stories of women in their midst.

As for me, I will never forget Mary's story. I will keep walking into the room with my "alabaster jar" in obedience and devotion to my Jesus.
Posted by Harriet Reed Congdon at 6:38 PM 2 comments: